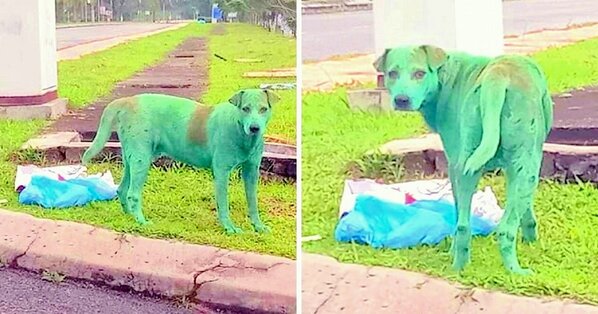 There are certain stories that make us wonder what could possibly be going through people’s heads. Why on Earth would someone torture an innocent animal and force them to suffer like this? This dog was found in Petaling Jaya, Malaysia. By the time he was located, he had been painted green and left to fend for himself. Shazreen Othuman was the first to find him.

She took to social media immediately, so that she could find help for the poor little guy. The paint fumes had made the dog sick and he was looking lifeless. He did not have any food to eat. He was dizzy and needed a great deal of help. Local animal rights activists were outraged when they learned of the dog’s plight. They could not understand why someone would do such a thing.

We can’t either, to be perfectly honest. Once a volunteer was able to rescue the pup, he was given the bath that he sorely needed. The dog’s paint exposure could have been fatal but the rescuers were able to get to him in the nick of time. We shudder to think of what might have happened to this dog if they didn’t. Other homeless dogs in this region could find themselves at risk, though.

That’s why it is important to take the time to spread the necessary awareness. While this is not a problem that most of us would expect to have to deal with, there is a wide range of animals who are tortured by miscreants like these. They do not deserve the treatment that they receive, by any stretch of the imagination. The authorities are now in the process of locating these creeps.

We hope that they are found and punished to the fullest extent of the law as soon as possible. They deserve nothing less! If any sort of inhumane crimes like these occurs, they need to be reported immediately. The more information that the authorities have to work with, the better the chances of avoiding these types of incidents in the future.

According to the local laws in Malaysia, these perpetrators could face up to three years in prison. That is not long enough but it will do! Please take the time to share this story with your friends and loved ones. It is time for these culprits to be caught and brought to justice as quickly as possible. Let’s all do our part to help the authorities out.

The Internet Swooned When A Dog Befriended A Baby Giraffe. Now 1/2 Of The World’s Cutest Odd Couple Has Suddenly Died

« Previous post
An Animal Shelter Accidentally Euthanized Her Cat. Now His Owner Wants Answers.
Next post »
Dog Trainer Put Down Her Healthy Dog For ‘Being Aggressive’

Any cookies that may not be particularly necessary for the website to function and is used specifically to collect user personal data via analytics, ads, other embedded contents are termed as non-necessary cookies. It is mandatory to procure user consent prior to running these cookies on your website.